I was bad today and had a chocolate cupcake.  That's not going to help me lose the baby weight I gained from my pregnancy, but it was so worth it.  I did eat it for a good reason - it was my daughter's 3 month birthday today and she wasn't able to eat it herself so I of course felt obligated to help her.  She did manage to have a taste of the frosting, but I'm not sure whether or not she enjoyed it being that it was her first time tasting frosting.  She had a surprised look on her face that was quite endearing and I think that's what made the cupcake taste that much better for me.

Today I have a new to me indie called Regal Beginnings by Emily de Molly.  She's based out of Australia and only ships within Australia, so the only way for us state siders to get her creations is by third party.  Good news is that there are some polish store fronts that are planning on carrying her line so hopefully we'll see more of her polishes here in the states soon. 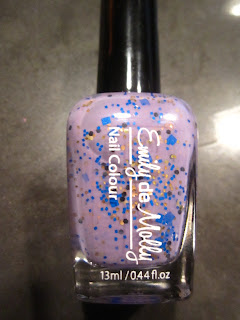 Regal Beginnings is a lavender cream based polish that contains blue, gold and black glitters.   I love the blue glitters because there are square shapes as well as mini glitter pieces that really pop against the lavender base.  The bottle itself is really unique, it reminds me of a Zoya bottle but with a longer neck which is really nice for handling during application.  The polish itself was of a good consistency, but perhaps a bit runny which I'm sure some people prefer.  The glitter was a little sparse during application as I did have to fish out some pieces and need to place some on the nail for even spacing.  I used three thin layers of polish which dried fairly smooth and only needed one layer of topcoat.  Overall all though, I'm happy with the polish and I'm looking forward to adding more to my collection.  The are taken indoors.


So what do you think?  Is this an indie that you're looking forward to adding to your collection?