Hello ladies!  Do you consider yourself a DIYer?  I like to think that I am, but I certainly don't do it enough.  Growing up I was really crafty and proficient with a sewing machine, but these days I'm lucky if I can find a needle.  DIY these days means fixing the toilet instead of calling the plumber, and I recently did a DIY fix.  LO used DH's phone as a frisbee and as a result, he had a crack in the screen.  Rather then sending it off to get fixed or replacing the phone, we realized there were $10 kits online to replace the screen at home.  Being brave, I ordered one and attempted to fix the screen myself.  With some a prayer and a hair dryer, I managed to pry the old screen off and replace it with the new screen in under an hour.  Thank goodness for YouTube!  It turned out not nearly as scary as it looks.  If I can do it, then anyone can!  Have you done any DIY lately? 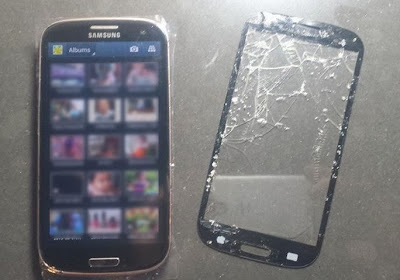 After trying my first Lancome a month ago and loving the formula, I caved and bought another one during Sephora's VIB sale recently.  I picked up a dark red vampy crelly called Rouge Reglisse.  I had hoped it was more of a cream rather than a jelly, but unfortunately it was more jelly which I find difficult to apply.  Double that difficulty with the wide Lancome brush, and I'm like a kid that can't color within the lines.  I had trouble getting clean application and even layers, so I guess you can say I'm not a fan of this particular shade.  The color is gorgeous and on point for this fall's oxblood trend, but I think I'll keep searching for a better formula in this color.  One plus is the fantastic shine it dries to on its own - there's no topcoat in these pics.

I needed to add some extra bling to this, and thought it would be the perfect opportunity to add a coat of Shiny by Hare Polish.  Shiny is a gorgeous glitter topper made of gold and iridescent flakes and hex glitter.  The iridescent flakes shift mainly blue and pink, and contrast really well with the gold.  I used one easy coat over Rouge Reglisse and had no difficulty with clumping or dragging, or loose flakes sticking up. This is finished with a layer of topcoat.


I adore how the iridescent flakes glow against the Rouge Reglisse.  It's only one coat, but that one coat looks like it has so much depth.  I plan using a coat of Shine whenever I need a little extra bling in my life.  Rouge Reglisse really needed a coat of it, especially to cover up my uneven application.  Hare still has the two other glitter toppers that were released as part of this collection available in stock, and I'm tempted to pick those up too.  Have you fallen in love with a glitter topper lately?
Purchased
Posted by Unknown at 12:40 AM