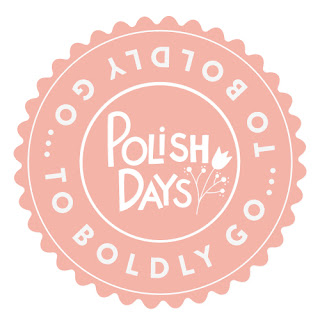 I always seem to get my inspiration for the Polish Days challenge at the last minute, and this month was no different.  I was trying to think of my favorite scifi shows, which are pretty much all of them, and realized that I needed to do something for Battlestar Galactica.  I didn't watch this show while it was airing, instead, I discovered in on Netflix after the series had ended.  I was addicted after watching the first episode, and watched back to back episodes of all four seasons over the course of a few weeks, sometimes cramming in five or six 1 hour episodes in a night.  It was thrilling and novel, and the storyline was epic.  I think it's probably one of my all time favorite shows ever to date.  That being said, if you haven't seen it, you need to watch it. Like, now!!

I based my mani on the Cylons in the movie, because I think the robots are so creepy but the women are stunningly beautiful.  For the red, I used Illamasqua Throb, a highly pigmented creamy red that is nearly a one coater, and then for the black, I used Illamasqua Boosh, a creamy black with similar formula.  The glitter on my pink and ring is Nerdlacquer HOCCHHHKSSSHHHHH(yes, I know it's not from the same series but hello, it's scifi!).  For the Cylon robot I used Illa Snap for the dark shimmery silver and DSW for the lighter grey areas.  The characters I cheated and used a silver Sharpie that was nearby.  The number 8 represents Grace Park's character Boomer, and the number 6 represents Tricia Helfer's character, over red polish to represent her iconic and sexy red dress. And how could I not use the word "Frak," BG's favorite curse word throughout the entire series?

I'm sure the other ladies contributing to Polish Days came up with some out of this world ideas, so please check them out below!