You may remember that I mentioned that my left thumbnail was splitting below the quick, and to preserve it, I've been wearing a bandaid over my thumb to prevent it from snagging and breaking altogether.  I finally went into the salon and had them repair it professionally so it could grow out.  They used a silk wrap and nail glue, followed with a coat of some sort of thick nail polish.  I don't think it was Shellac because there was no curing involved, but I think the fix will last me for a while.  Here's the after pics so you can see what the fix looks like.  Sorry for not having before pics! 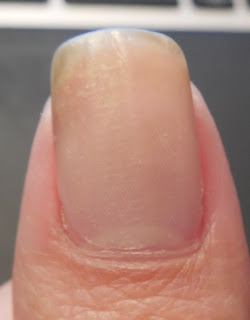 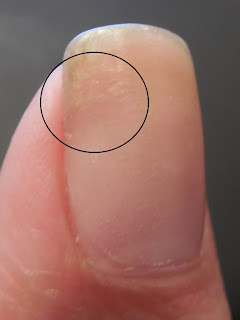 See how far down the break was?  Yikes!  In the meantime I can't use acetone, so I'm sticking with Elmer's glue basecoat and non-acetone nail polish remover.  The swatches below are with my repaired nail.

After wearing YSL's Jade Imperial, I really didn't want to stop wearing that shade of green so I was happy to receive Pahlish's Like Calendar's Dying, a lovely pale green crelly crammed with crazy shimmering glassflecks and specks of green mini hexes and circle glitter.  The combination is unlike most of Pahlish's creations but yet echo the same great consistency of formula and ease of application.  I used three coats for full opacity and finished with a layer of SH Insta Dri for shine.


I love how delicate this polish appears, and I can't stop staring at the beautiful glassflecks! The circle glitter ain't half bad either. I got the other two colors that were part of this collection and hopefully I'll get a chance to swatch both of those for you soon too.  But my big question is, can you tell my thumb nail's been repaired?  I can't, except for the fact that the nail is shorter than the others, but she had to file it down to remove the wrap from the nail.  For five bucks I'm not complaining, as long as it stays put!  All in all, I'd happily do the same repair again, rather than attempting to do it at home.
Posted by Unknown at 1:02 AM