Catrice No Snow Petrol, Lilactric, and Mint Me Up with bonus nail art

Recently I won a raffle by the lovely Ceitie over at Pollia Polish, and I received the package this weekend.  Wow, what a prize!  I'm so excited by everything that was included in the package.  I've already eaten the Haribo gummy frogs she included, but polish-wise, she included a Catherine Arley holo, four Catrice polishes*swoon*, an e.l.f., two Essence polishes including one from the Fruity line*hooray* and finally a new to me indie by SoFlaJo.  Look at all the pretties!!

I've been lemming Catrice polishes so hard and I'm so incredibly happy that Ceitie included so many Catrices for me to play with.  The first one that caught my attention was No Snow Petrol, a lovely dark shimmering teal with light green shimmer.  TDF!  My only regret is that I couldn't capture the shimmer through the pics.  I used two wonderfully easy coats with no streaking in this mani, followed with a layer of Poshe.


I wanted to try some more nail art, so I stamped my index and ring finger with Mint Me Up using the peacock print from a Bundle Monster plate.  My final touch was to add a gradient on my middle finger.  I didn't initially look at Mint Me Up too closely the first time around, but second glace I noticed the copper flakes in it.  Oh. Em. Gee.  Love!  I'll have to swatch that one alone at a later time so you can see how gorgeous it is. 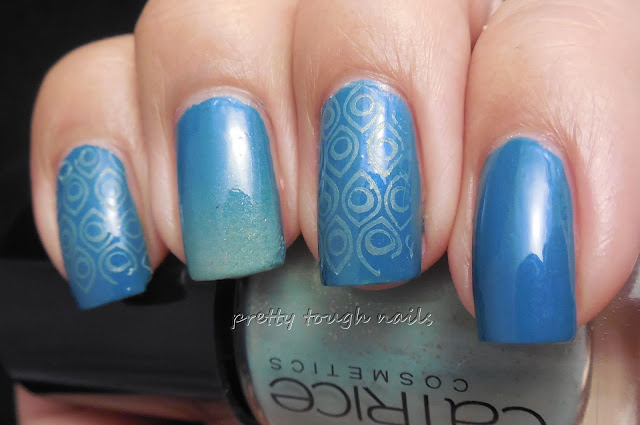 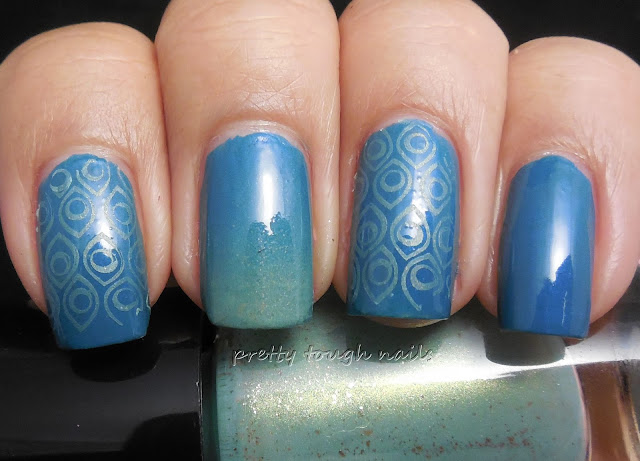 My second swatch tonight is Catrice Lilactric, a pale lavender with pale golden shimmer.  It's really pretty in real live but again, the shimmer was so difficult to capture on camera. I used two coats again here, with very minimal streaking and brushstrokes and finished with a layer of Poshe.

Finally, I'll finish this post with another attempt at nail art.  Recently on instagram, @kgrdnr posted a tutorial on how to make a stone mani.  I tried to follow her technique to make a purple version but it didn't turn out very well.  I used Essence Twilight 2's Piece of Forever sponged across all nails, and the tried to do the spotted technique with China Glaze Urban Night.  I couldn't get the spots to come out properly on the water so it looks more like a splatter.  Maybe I need to use a standard pump hair spray rather than an aerosol hairspray. 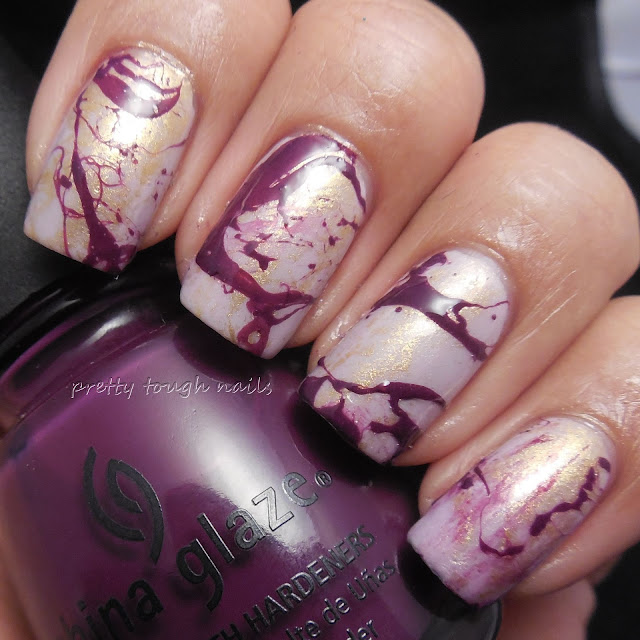 Try not to laugh too hard at that.  I'll keep trying and hopefully be able to post a before and after comparison.  Big thanks to Ceitie for having such an awesome giveaway!  I'm so grateful to have won and I had soooo much fun with all the polishes.  I plan on swatching the rest another night - I need to try that Essence polish ASAP!  It's so difficult to get overseas polishes and I'm really pleased at how well these polishes performed overall.  I'm happy to add these to my collection.